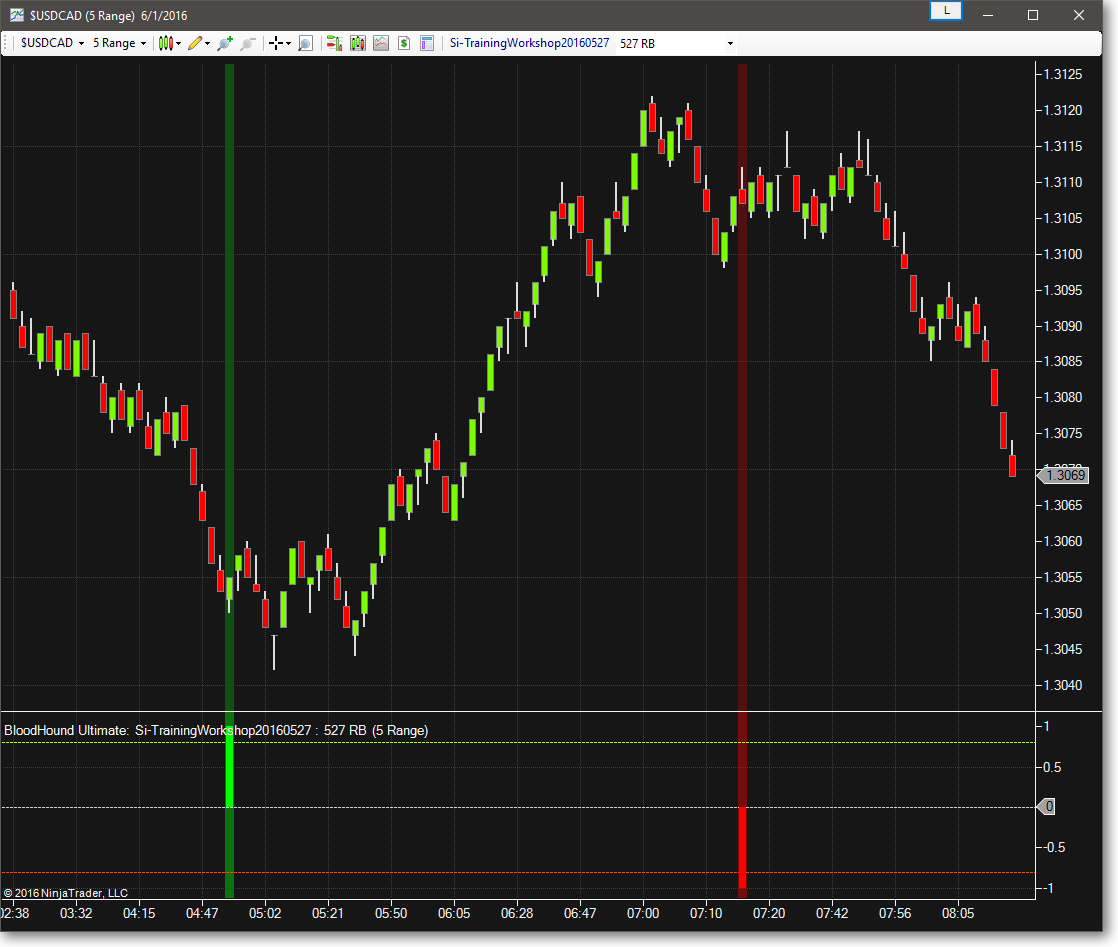 Bloodhound is a user programmable indicator based on fuzzy logic.  It takes observations from price action, indicator behavior and other factors as inputs and allows you to design custom logic constructs using logic templates to arrive at a calculated output.  With BloodHound you can encode the behavior of any system, setup, filter or trade signal. BloodHound is a blank canvas – how you use it and how you configure it is entirely up to you.  It is a powerful fuzzy logic calculator that has no limits on how complex your logic specifications may be.  It allows you to define the inputs, and you define how they are used to arrive at a result. 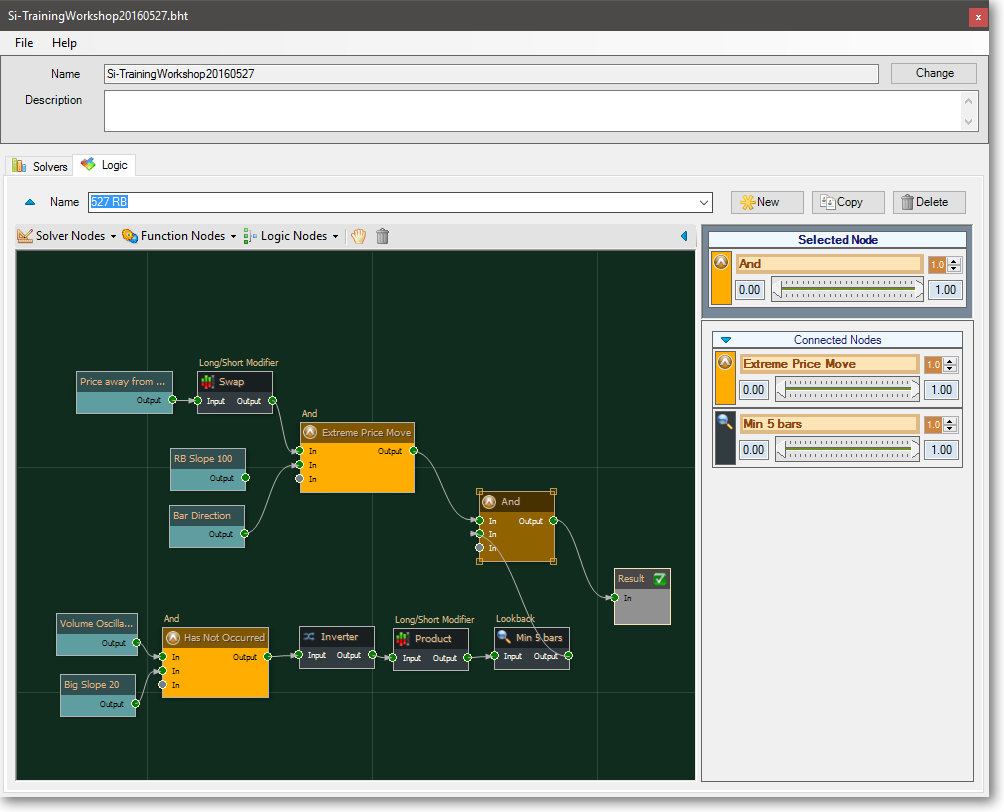 For example, you may have a trading system with defined entry rules based on what’s happening with certain indicators and price bars on multiple time-frames.  You can use BloodHound to describe your system in exact detail, painting your chart with long and short signals.  These signals can also be fed into a NinjaTrader strategy dictating when to buy and sell.  Your resulting strategy can then be easily modified by re-configuring BloodHound’s logic.  This can be done in real-time, allowing you to change the behavior of your automated (or manually traded) system quickly and easily, without the need to update your strategy code. Strategies utilizing BloodHound can be brought into NinjaTrader’s Strategy Analyzer for back-testing.  Again by modifying the BloodHound logic you can alter your strategy buy and sell signals without manipulating any code, resulting in a very rapid prototyping  and back-testing cycle. 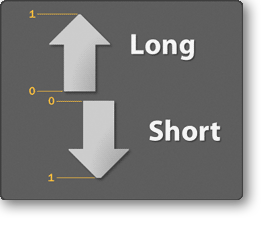 BloodHound’s default outputs are a value between 0 and 1 for the long side and the short side.  BloodHound is actually calculating two separate evaluations for every bar.  A confidence value for the long side, and a value for the short side.  You can use these calculated values to represent trade signals, market filters, or to indicate that a condition is satisfied.  For example, you can program BloodHound to give you a favorable signal when a certain condition happens on an indicator.  When BloodHound outputs 1 for the long side, and 0 for the short side you can use that as a signal for a long trade, or alternatively use it as a filter to take only long trades.  The choice is yours how you ultimately use the values calculated from bloodhound.  The power comes from being able to quickly reconfigure BloodHound’s output by just manipulating the logic in real-time.

Outputs are called confidence values, and their output ranges between 0 (zero) and 1.  0 being an unfavorable value, and 1 being favorable.  BloodHound outputs decimal numbers as well.  This can be thought of as degrees of favorability.  For example, an output of 0.8 for the long side is considered more favorable than an output of 0.5.  Note: it’s more than possible and sometimes desirable to have both the short and long side evaluate to the same value at the same time.

You can configure how much greater one side has to be over the other side to be considered a valid signal in one particular direction. You can also set BloodHound to ignore the ratio between long and short signals by setting theCompare Long and Short Confidence to false.

This opens the BloodHound file you wish to load on initial indicator start up.

This setting enables the chart background coloring when a BloodHound signal is plotted (when the confidence value is greater than the signal threshold).
Please note: NinjaTrader only allows one indicator on the chart to shade across the entire chart.  If the racing stripes are not showing on the price panel, that means there is another indicator on the chart that is loading up first (before BloodHound loads) and thus NinjaTrader is allowing that other indicator to shade across the entire chart.  And therefore, BloodHound is not allowed to shade the chart.  Removing that other indicator from the chart and adding it back should allow the racing stripes to work again.

This enables a ratio requirement to set how much greater one side has to be over the other side to be considered a valid signal.  The signal direction in question must be greater than the opposite signal direction by a factor of the Confidence Ratio value to be a signal.
This provides additional filtering of signals from fuzzy logic systems other than the Long & Short Threshold inputs.  A signal in both directions can not occur when this option is enabled.

This is the minimum ratio value required to validate the signal direction in question.

E.G.  If this ratio number is 1.5, a Long signal is only valid if the long confidence is 1.5 times greater than the short confidence, and vice versa.

This option will play sound alerts when a signal occurs.  When the Calculate setting is set to 'On Each Tick' or 'On Price Change' the sound plays when the bar closes to prevent annoying repetitive audio alerts playing as price ticks up and down intra-bar and signals appear and disappear.

The setting below become visible when Play Sound is enabled/checked.

Long Signal Sound File
Choose the sound file used to alert when there is a long signal.

Short Signal Sound File
Choose the sound file used to alert when there is a short signal.

Send an email when a signal occurs.
Important: You must setup NinjaTrader’s Email configuration.  Go to NinjaTrader Control Center » Tools > Options » Misc tab.  NinjaTrader has provided instructions on their support forum, Email configuration.
Please Note: Some email providers filter these emails into spam/junk folders.  Most providers have a way to add filters to prevent that from happening.  Check with your email provider for that option.

Email Form
The email address that will be used to send the emails.

Email To
The email address to send the alert emails to.

This can also be turned On or Off in BloodHound's interface at the bottom left corner.  Use the Apply button, to the right, to manually recalculate the system.

Description Set to True, this setting is used to reduce the number of calculations per second that BloodHound makes to increase performance. This setting only operates when "Calculate On Bar Close" is set to False.

Maximum Ticks Processed Per Second
Description Lower numbers improve performance by reducing the number of calculations BloodHound performs per second. Only available when "Throttle Incoming Ticks" is set to True.

NinjaTrader Tip:
If you use an indicator which requires the Calculate property to be set to 'On each tick' to run correctly (such as a volume profile or order flow type of indicator), then NinjaTrader requires the hosting indicator's (i.e. BloodHound) Calculate property also be set to 'On each tick' in order for that guest indicator to run correctly.
In other words, NinjaTrader takes the Calculate setting of the hosting NinjaScript (indicator or strategy) and applies it to all the guest indicators used by the host.  In this case BloodHound is the hosting NinjaScript.

This property is only visible from within the Market Analyzer.

Use this property to change the Market Analyzer's column name.  Changing the Label property will have no effect.

The following sections are added by NinjaTrader.  They do Not come from BloodHound.
You can find an explanation for these sections and properties in the NinjaTrader Help Guide.

Reminder:  The Long Confidence plot is considered a long signal when the value is equal or greater than the Long Threshold value.  The same is true for the Short Confidence plot.  See the section above for more detailed information.