This section is specific to BloodHound v2.  Scroll down for BloodHound v1.
Documentation is forth coming.

This BH v2 section is under construction 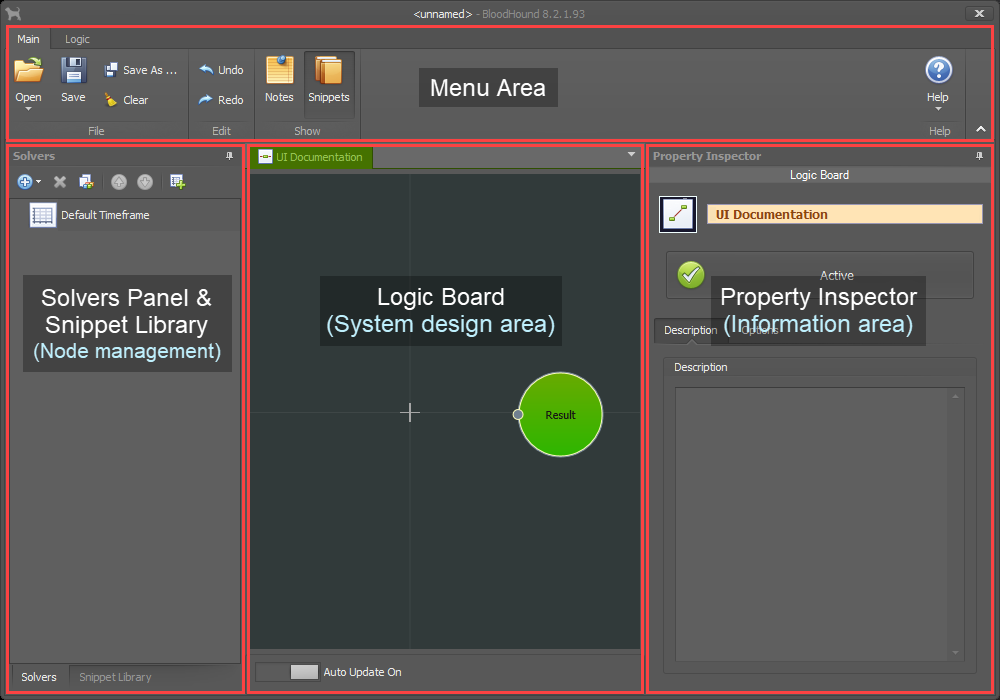 Menu area.
The top area is a standard ribbon style menu.  The File tab provides typical file management buttons for saving and opening your BloodHound files.  The Logic tab has all the buttons for building a system, and navigating around in the Logic Board area.

Logic Board (System design area)
This panel in the middle is where the BloodHound system of nodes is built.  There are tabs on the top side of this area to switch between Logic Templates.

Solvers Panel & Snippet Library (Node management area)
This area on the right is two panels.  The tabs, on the bottom of this area, switch between the master list of all Solver, and your snippets library.

Property Inspector (Information area)
This panel displays information and settings of the selected object(s) in either the Logic Board or Solvers Panel. 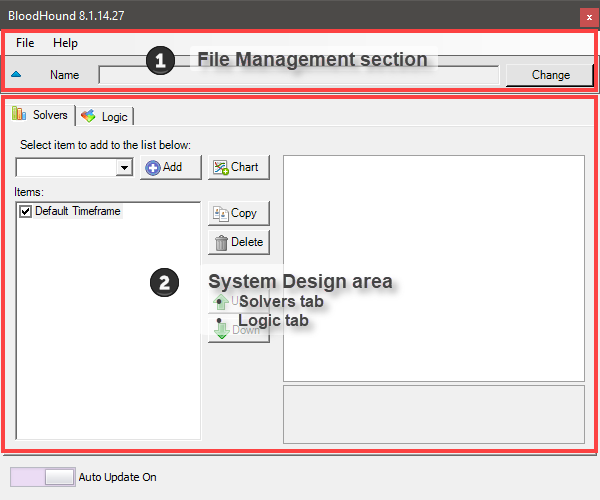 File Management section.
This area displays the name of the loaded template file, and has standard File and Help drop-down menus.

System Design area.
This area is were your system is built.  Referred to as the system logic.  Various components of this area are disabled in the Pro and Standard editions of BloodHound.  See section BloodHound Editions if you have the Pro or Standard edition.

The System Design area is divided into two sections.  The Solvers tab, and Logic tab. 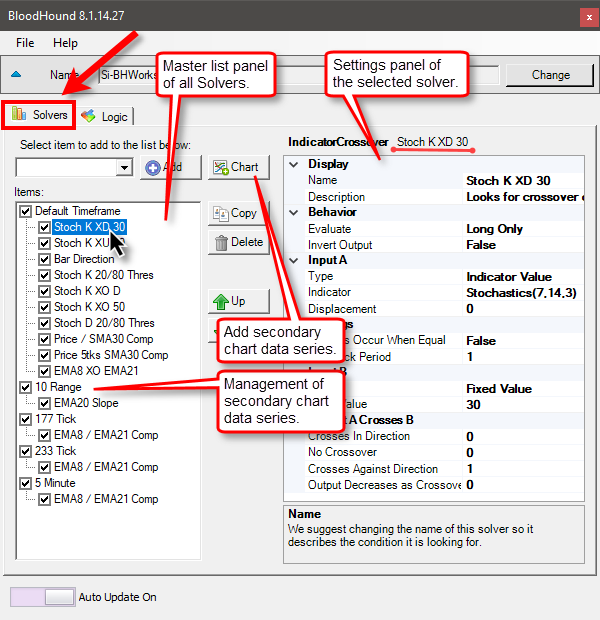 The Solvers tab is a master list of all solvers, and where secondary chart Data Series/timeframes are managed.  Solvers can be copied, deleted, or moved to different Data Series. 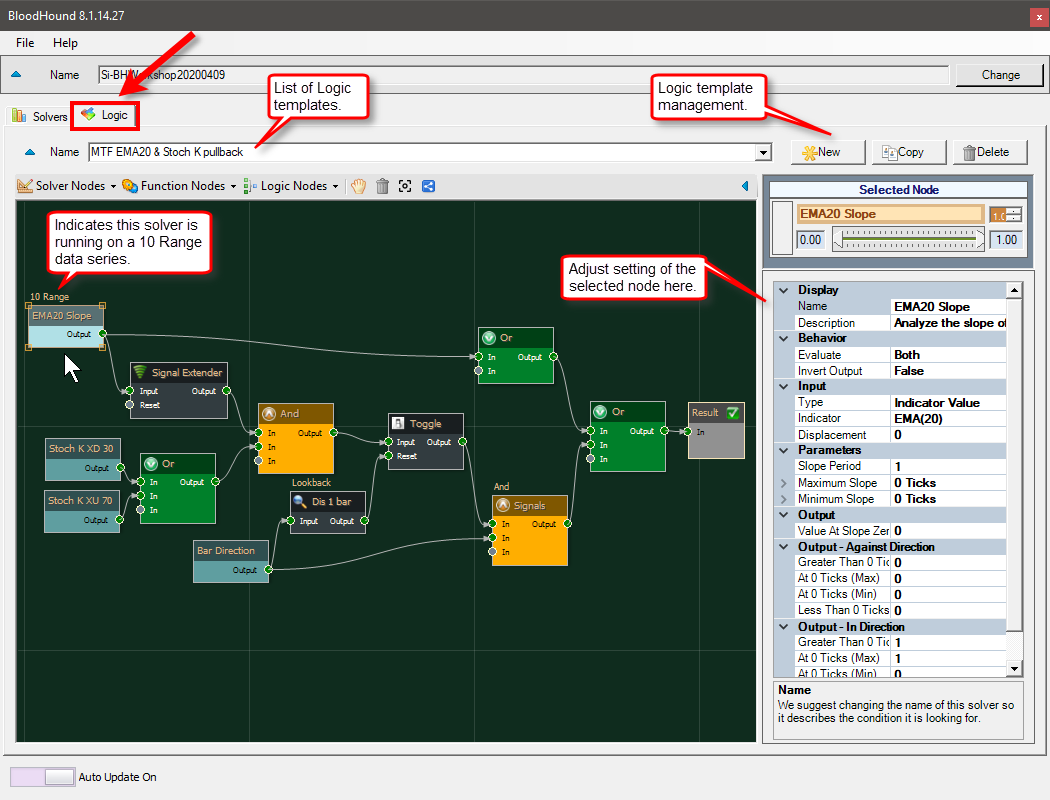 This area displays the name of the loaded template file, and has standard File and Help drop-down menus.  Click the images to enlarge. 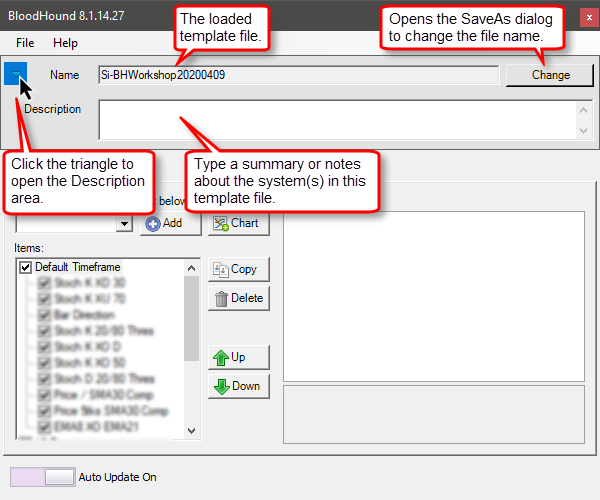 The Change button on the right is a quick way to open the Save As dialog window to change the system's file name.

The green triangle button will open the Description area.  This area is for writing a summary or notes about the system as a reminder.  Click the green triangle to open or collapse this section. 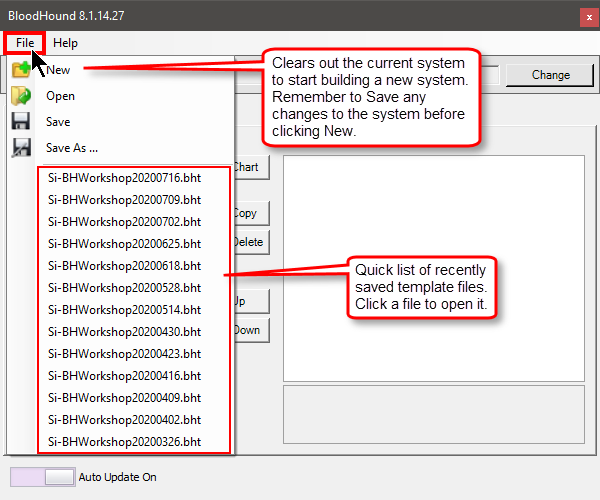 File dropdown menu.  This is where you can open, save, or start a new system.  BloodHound is unlike any indicator you have used before.  Think of BloodHound similar to a Microsoft Excel spreadsheet.  You fill the spreadsheet with formulas and data, and then save your work to a file so you can use the spreadsheet again at a later date.  It is the same with BloodHound.  You save your system/work to a file so you can use it again after shutting down NinjaTrader. 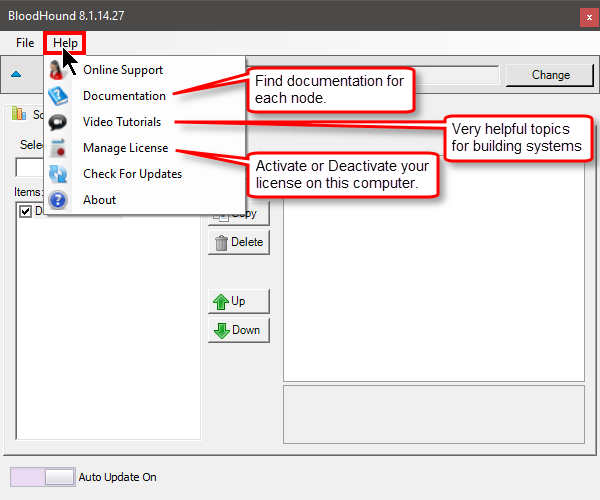 Close window button.  The "X"/Close button at the top right closes the interface window, and also saves to the file.  Any action that causes the BloodHound window to close (i.e. anything that causes a chart reload) also causes an automatic save to ensure changes are not accidentally lost.  This is similar to an autosave feature.
Closing the interface does not perform an automatic load check.

This feature assists the trader in automatically preserving their work.  There are important situations to be ware of, so please read carefully.
Please note:  When the same template file is loaded into multiple instances of BloodHound and edits/changes are being made to the system, the trader must be very aware of which BloodHound the changes are being made to, because it is easy to accidentally have one of the other BloodHounds overwrite the new system changes with the old system.

This feature assists the trader in automatically preserving their work.  Please note:  When the same template file is loaded into multiple instances of BloodHound and edits/changes are being made to the system, the trader must be very aware of which BloodHound the changes are being made to, because it is easy to accidentally have one of the other BloodHounds overwrite the new system changes with the old system.

Important note:  If two or more interface windows are open and they have the same template file loaded, a data feed connection will cause all charts to reload at the same time.  If this occurs, every BloodHound with an open interface window will all try to auto save at the same time, but the last BloodHound that is shut-down/reloaded by NinjaTrader, is the last one to auto-save to the file.  Not necessarily the BloodHound with the new changes.  A BloodHound with an older system in memory could be the last one to save, thus overwting the new changes.  NinjaTrader determines the order in which each indicator is shut-down/reloaded.  And, it is random each time.
Whenever you edit/change a BloodHound system, be sure to load the new changed into the other BloodHounds as soon as possible.  When a newer template file exists, opening the interface will pop-up a dialog window asking to load the new file, making the process easy and quicker.

The semi-automatic loading only occurs if the file's timestamp has been updated.  A chart reload is required to initiate the autoloading.  BloodHound records the file's timestamp whenever it loads a file, or saves to the file.  As a practical matter, semi-autoloading will only be invoked if the same template file is open in two or more instances of BloodHound and edits to the system are being saved.

A typical scenario.  It is common for traders to run the same BloodHound system on several charts and/or instruments.  Making changes or edits to the system is also very common.  When you make changes to one of the BloodHounds, closing the interface saves those changes back to the file.  Now, reloading (pressing F5) the other charts will trigger BloodHound to autoload the updated template file.  This autosave and autoloading capability makes transfering system changes to other BloodHounds easier and faster.

This area is where the system is built and maintained.  It is split into two sections.  The Solvers tab, and Logic tab.  Click the images to enlarge. 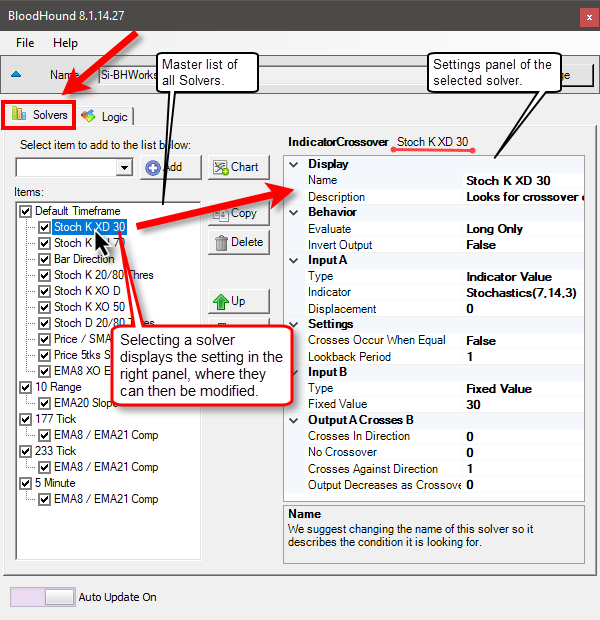 Left and right panels.  The left panel is a master list of all the solvers and Data Series(timeframes).  The right panel displays the settings of the selected solver or Data Series, where they can be edited. 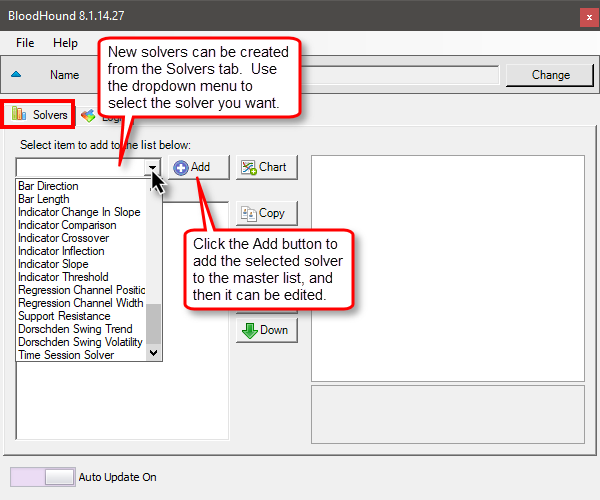 Solver dropdown menu.  This menu is used primarily by the BloodHound Standard edition users.  For BloodHound Ultimate edition users, when you become proficient in building systems you might start creating solvers here first.  Then add them to the logic board and connect them up afterwards. 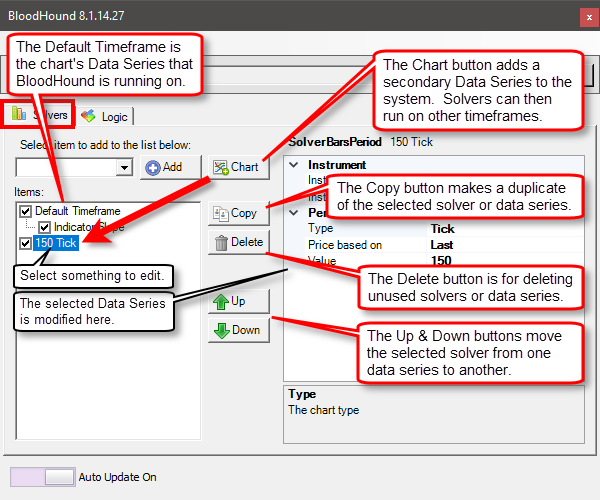 The Buttons.
The Chart button will add secondary Data Series (commonly referred to as a timeframe) to the system.

The Copy button will make a duplicate of the selected solver or chart (data series).  This is handy for quickly making a new solver that is very similar and only needs a few changes.

The Delete button is for removing unnecessary/unused solvers or data series.  As your system progress and changes are make, there may be solvers that are no longer being used and are unnecessary.  It is good practice to delete those solvers.  That will help BloodHound run faster.

The Up & Down buttons are for moving solvers from one data series to another data series.  It is not for organizing solvers into a specific order. 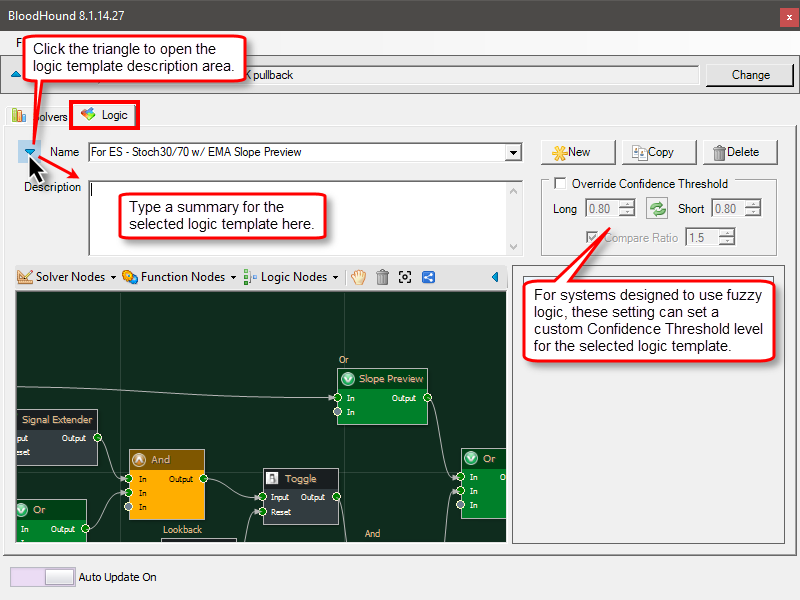 The green triangle button will open the Description area for the selected logic template.  This area is for writing a summary or notes for that specific logic template.

The Overwrite Confidence Threshold option on the right side allows each logic template to have a its own confidence threshold values, for generating signals, when using fuzzy logic.  To learn about the confidence thresholds see the BloodHound Output section.  To learn about fuzzy logic see the How BloodHound Works page.
Click the green triangle to open or collapse those areas. 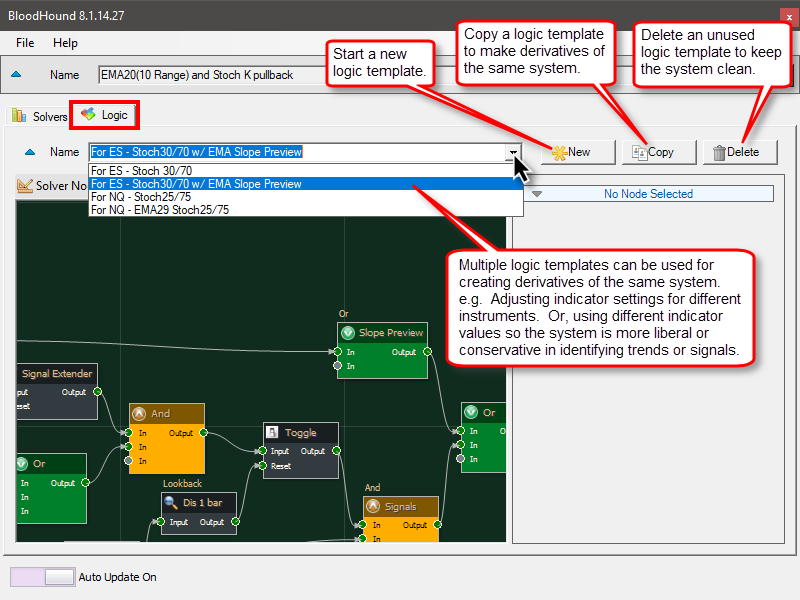 The Logic Template dropdown menu opens the list of logic templates.  Within each BloodHound (template) file, multiple logic templates can be created.  Each logic template is a separate system.  Logic templates are not linked together.  i.e. Their outputs do not affect each other.  They can share/use the same solver, and therefore changing the settings of a shared solver will change the results of both logic templates.

Not Recommended:
To keep your systems better organized, it is bad practice to build a trend following system, counter trend system, and break-out system all in the same template file.  It will be easy to forget all the systems within the various template files you will eventually create.

The New button is used to create/start a new and blank logic template.

The Copy button creates a duplicate of the selected logic template.  The new copy then should have the logic template name adjusted, and then adjustments to the logic/system can be made.  See Best Practice above for practical examples for using the Copy button.
Also see "Logic Template dropdown menu" above for important information about shared solvers.

The Delete button will deleted the selected logic template.  Keep your system lean and remove logic templates that will no longer be used or needed. 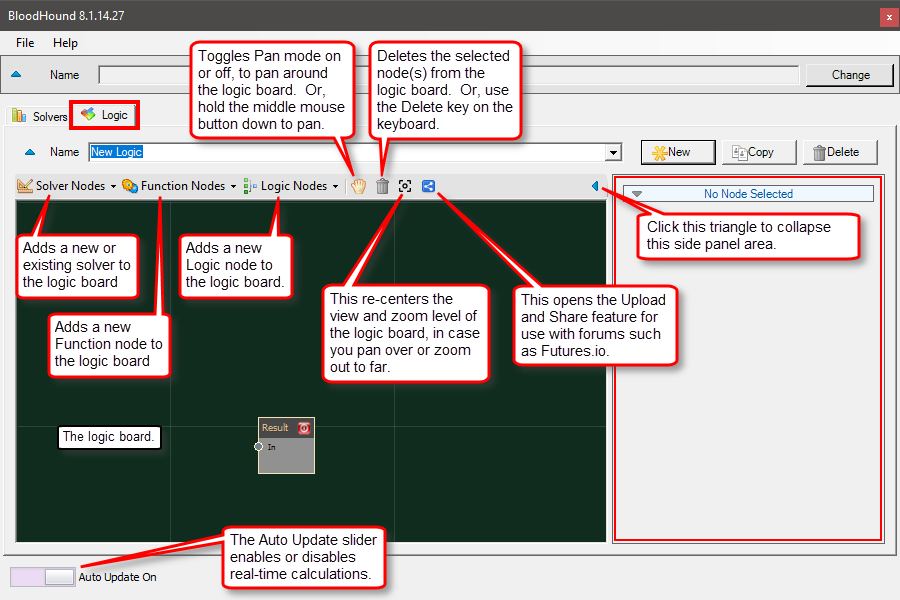 The Solver Nodes, Function Nodes, and Logic Nodes dropdown menus is how nodes are added to the logic board.

The Hand button toggles pan mode on & off.  The logic board can be panned from side to side to access more of the boards area.  If your mouse has a middle button, press and hold it down to activate pan mode.

The green triangle on the right will collapse the setting side panel to increase the viewing area of the logic board.

The Auto Update slider button toggles automatic calculations on or off.  If making changes to your system is taking a long time to update, then set Auto Update to off.  Make the changes/edits you want and use the Apply button, on the right side, to perform a single recalculation.  When finished editing, turn Auto Update back on. 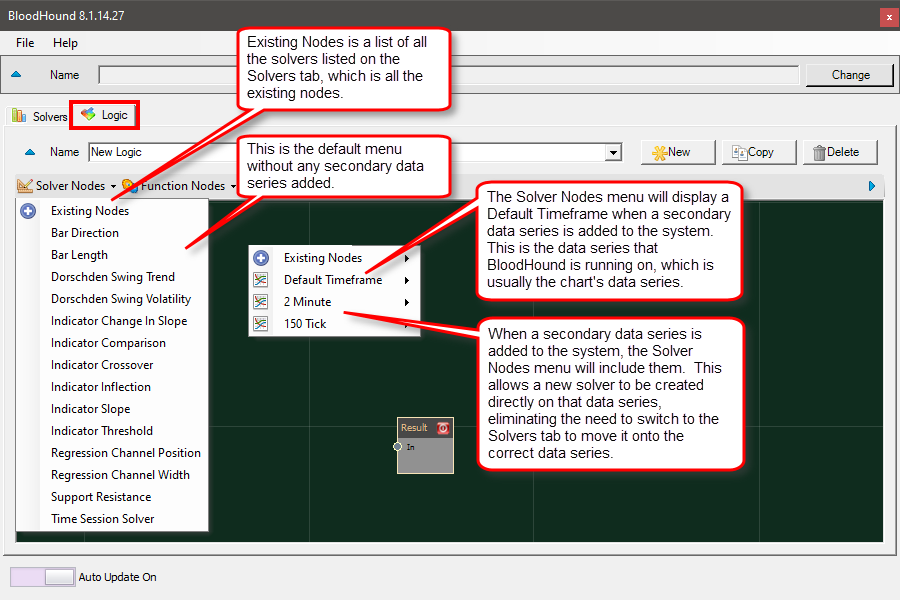 The Solver Nodes dropdown menu will automatically update to display all the data series added to the system.  This allows a new solver to be created directly on the secondary data series without having to switch to the Solvers tab to move the new solver onto the correct data series. 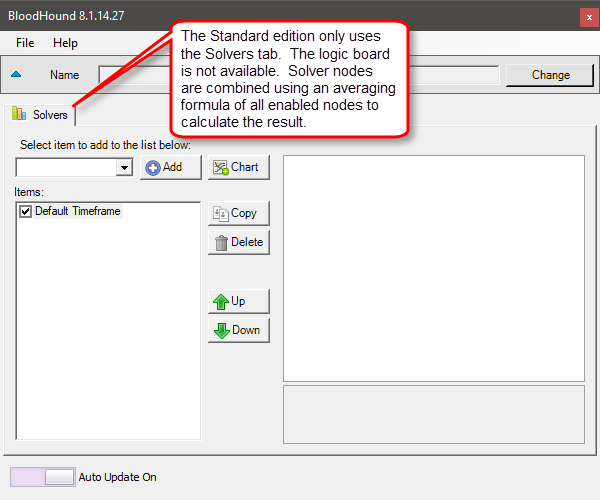 The Standard edition utilizes the Solvers tab interface only.  The Logic tab is unavailable.  The final output/result is calculated by taking the outputs of all enabled solvers and combining them together using an averaging formula.  The Standard edition is where the check boxes for each solver is meaningful. 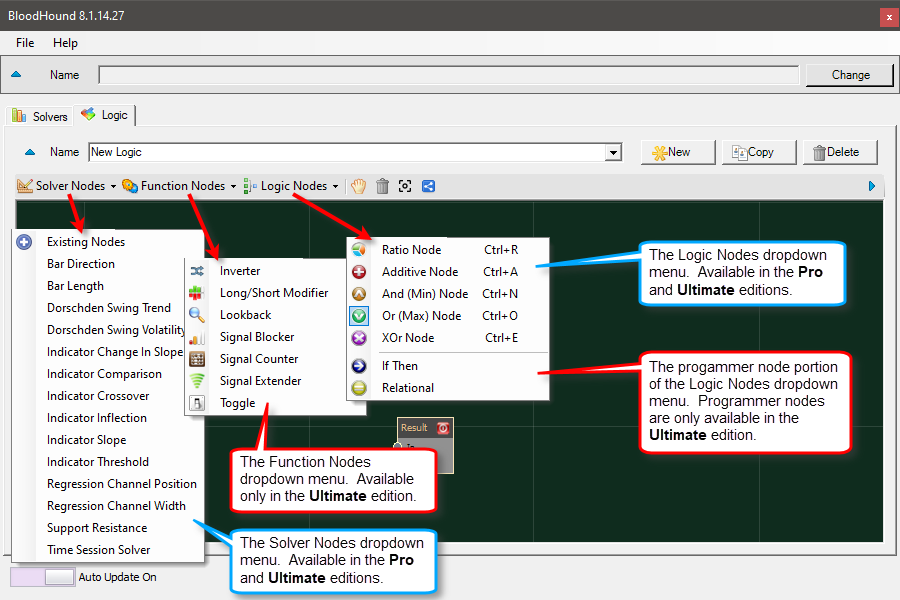 The Pro and Ultimate editions are far more powerful due to the capabilities the Logic tab offers.  The Pro edition does not have Function nodes or the Programmer nodes.